Log line: Missives abound in Cicely as Maggie reads a note she wrote to herself as a teenager and Shelly wonders about a threatening chain letter; Joel’s worry that he may have cancer leads to a new lease on life.

Like last week’s episode, “The Letter” examines the past, re-evaluates that present, and looks to the future. Maggie finds a letter she wrote to herself when she was a teenager and is visited by her younger self; Chris encounters the new barber who was forced to run away from his past; and when Joel is faced with the possibility of cancer, he sees his life flash before his eyes. In order to face the future, characters have to look back to where they’ve been.

We mentioned on the podcast that this episode is one of those fine examples of how music sets up the mood of the story. It is incredible to us how perfect each song is to its accompanying scene, and this week we’d like to examine what the music choices bring to the viewer experience, and how much richer the episode is because of the songs. Unfortunately, all of the original music was replaced in the DVD version, so what today’s viewer experiences will be a lot different from when the episode aired some twenty years ago. 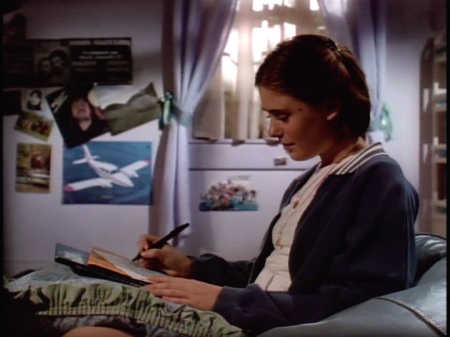 The ABBA song “Dancing Queen” instantly sets the mood. It is 1976, and a fifteen year old Maggie is writing a letter to her future self in 1991. The song itself is lighthearted, catchy, and all about a teenage girl having the time of her life on the dance floor: “You are the Dancing Queen, young and sweet, only seventeen.” For both the girl in the song and for Maggie, the world is full of possibility, and so are they, on the verge of some great potential. For the young Maggie, the idea of being thirty is almost inconceivable.

When we next hear ABBA, Maggie is awakened by “Take a Chance on Me,” and meets herself as a fifteen year old playing records (and wondering what compact discs are). The song foreshadows the presence of the manifestation, and reminds Maggie of the dreams she once had for herself. While the song is about pining for a guy, the lyrics can be read in a different way, to be about the two Maggies:

Maggie doesn’t need anyone to figure things out; she has herself to solve her own problems. And while she fights with herself as the young Maggie becomes her constant companion, Maggie eventually recognizes that her young self has a point in making her re-examine her life, and she resolves to change her life: “I came here to tell you that I actually think you’re right about some things. My job, flying. It’s great, but it’s not enough anymore.”

In the final scene of the episode which brings us back full circle from the first scene, we see Maggie writing a letter to her future self. Having resolved to run for mayor, we see a more confident woman who intends to make a difference in her world. The song that accompanies this scene is Blondie’s 1980 cover of “The Tide is High”; it is just as catchy as the previous songs featured in the episode, and the lyrics (while again addressing a man) can be interpreted as a song about self-empowerment:

The tide is high but I’m holding on
I’m gonna be your number one
I’m not the kind of girl who gives up just like that
Oh, no

Throughout this episode, Maggie argues, cajoles, and negotiates with herself, and finally comes to a realization of who she is and what she wants. Her most significant relationship here is with herself.

Other excellent use of music in this episode is the instrumental “Pipeline” by the Chantays which accompanies Joel on his joyride. The surf tune perfectly sums up the Joel’s rebellion and current lack of concern for his own safety. Its trills mimic the growl and reverberation of the Harley’s engine.

A significant departure from the rock and pop is the song “Darn that Dream” sung by Dinah Washington in 1954. Appropriately, it plays in a scene with Angelo, who earlier expressed distain for rock and roll and all of counterculture. The jazz standard is perfectly suited to the barber’s sensibilities. It is a love song, but it is also about lost dreams, and this reflects Angelo’s situation of having to abandon his former life and having his future stolen from him.

We have seen many times how important music is for Northern Exposure. While the chosen songs’ meanings aren’t “on the nose” like other episodes, music has this incredible power to hint at our subconscious and set the stage of our expectations. The songs set the mood and places us in Cicely’s living rooms.

Themes / Recurrences: The past; the future; destiny/luck.

The Good: We both really enjoyed the character of Angelo Maxwell, wonderfully played by Bill Cobbs. (Sadly, this will be the barber’s lone appearance on the show.) We also liked how the themes of the episode floated across storylines.

The Bad: One of us was less fond of the chain letter plot. We regret that all of the music for this episode was replaced on the DVD version.

The Notable: Ed is selling his issues of influential French film magazine Cahiers du Cinema, aside from the ones with Godard interviews. This is another indication that Ed is straying from filmmaking to focus more seriously on training to be a shaman.