Log line: On Joel’s birthday, Maggie sets off to Manonash to rescue him from an untimely death; what begins as a dinner party turns into much more for the Capras.

In “The Great Mushroom,”Northern Exposure continues to help the audience transition from Joel to the Capras. In previous weeks, Joel has been away at a remote village up river, and the Capras have gotten to know the town of Cicely and its residents. The transition has been slow and gentle, as we get introduced to the new couple very slowly and as we very slowly start to say goodbye to Joel.

One theme of this episode is the idea of interconnectedness and being part of a whole, which is prominent in all three storylines. We have images that portray that, from the birthday cake, the cutting of the chicken wing, the jig-saw puzzles, and computer subdirectory. 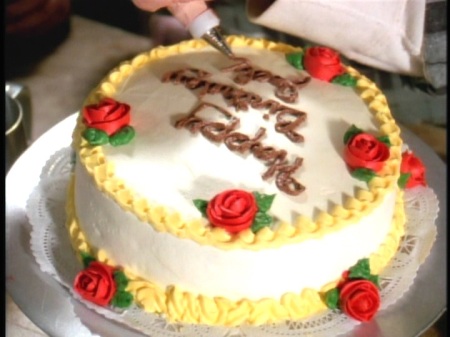 Of course, the main metaphor that the show uses is the honey mushroom, where each outcropping seems like separate, individual mushrooms, but are really part of one huge mushroom. Clearly, there is tension in this message. While Joel is telling Maggie about this interconnection between people, we repeatedly see him getting killed in unusual and horrendous ways (quicksand, boulder, fire, plane bomb!). One can argue that these death scenes definitely undercut the message of wholeness. 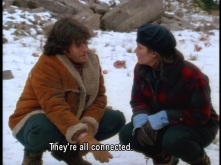 The conflict between the individual and the community is evident in this episode (and in the show as a whole). Maggie is so only focused on her guilt, her suppressed anger that she has these spontaneous visions and dreams of Joel dying. She claims responsibility for Joel’s desertion, blaming it solely on her breaking up with him.

Ed has similar conflicts with the computer. At first, he is deathly afraid of it, and declares it a monstrous thing, that’s too big and immense to contemplate. It appears that he is afraid of his own individuality being swallowed by the machine.

However, when he encounters Walt and his nifty computer programs, Ed realizes that the computer is a tool that can be used to connect (as he sees Walt being connected to the stock exchange), and a tool to express one’s individuality.  It can also be seen as a reflection of reality, combining nothingess and something, death and life.

Michelle and Phil also have a private-public conflict, as the Thompsons impose on their hospitality and stay at their home for a few days. The couple struggle between being a private couple, and being part of the community. As they interact and observe the older couple, they come to a realization that they can become a piece of the puzzle that is the community of Cicely. They can belong here, as they’ve never belonged anywhere else. 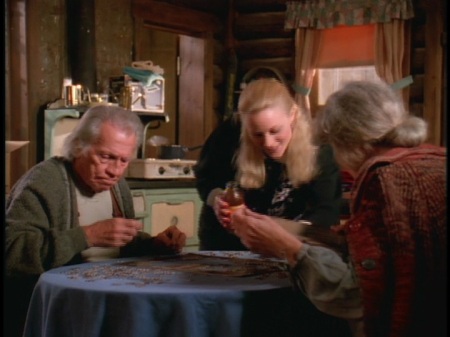 Perhaps what the writers and producers are trying to do is ultimately reassure us that even if Joel leaves, he will still be part of the show – that his presence will leave traces, that he will always be a part of the show, a jigsaw piece that may not be seen, but still connects to the whole picture. 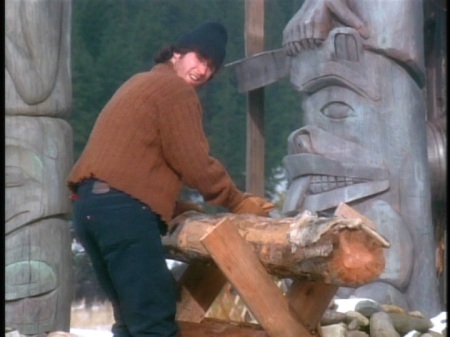 The Good – We both liked the way the Thompsons spurred the Capras to realize they could become a part of Cicely. One of us (Shane) really enjoyed the meditative stillness of the Thompsons, and one of us (On) was very entertained by Maggie’s visions of Joel’s death. We appreciated Walt’s appearance here, as well as the metaphor of the honey mushroom.

The Bad – Neither of us liked the idea of Ed being afraid of computers, which contradicts past episodes and, frankly, just feels weird and a little tired.

The Notable – Joel’s death sequences are a callback to Maggie’s dead ex-boyfriends. 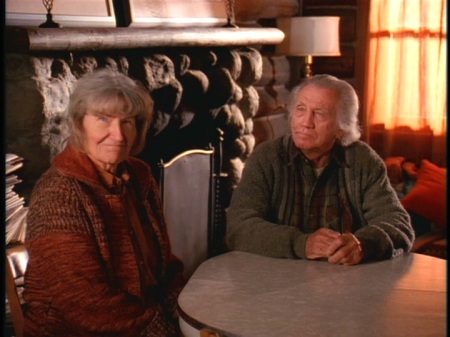