Log line: It’s lights, camera, action as Ed films Marilyn telling the story of her grandfather, his relationship with a Russian princess and their plans to meet in Cicely. 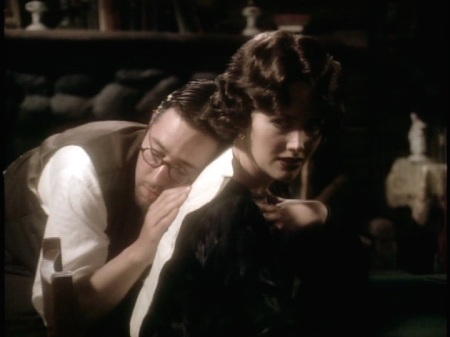 “Zarya” is a sequel of sorts to Season 3’s “Cicely,” and unfortunately the season 6 episode suffers from the comparison. There are a number elements that make them similar: the framing device of a person telling a story (Ned vs. Marilyn); going back in time to old Cicely; historical figures visiting Cicley (Kafka vs. Lenin/Anastasia). However, the fact is that the stakes are not as high in “Zarya” as they were in “Cicely” – in the latter there was tragedy, emotion, and the story was one of life, death, and the mortality of an old man; in “Zarya,” what’s at stake is only Marilyn’s sore leg.

Nevertheless, it is delightful to have updates on the characters we met in the earlier episode. Sally and Abe are still in love, and carrying on Cicely’s artistic traditions, while Kit is a visionary pastor, and Mace has become a successful businessman. 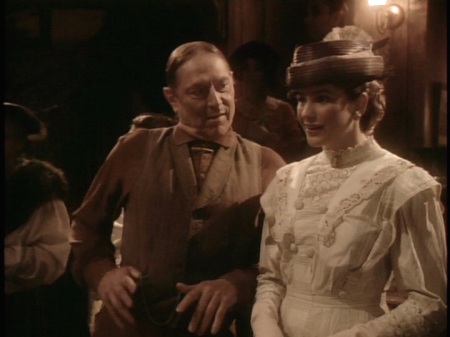 There are little moments that delight, from Rhoda (Ruth-Anne) offering “tincture of opium,” “codeine,” and “heroin syrup” for a common cold, to the introduction of jazz to the town.

Yet the episode is a strange one. It’s crammed with everything imaginable: class division, clashes between capitalism and communism; two star-crossed romances; new inventions and technologies; jazz; historical reimagining; religion; movie-making; ideas about nature. It’s a lot. Some would say it’s much too much.

The episode is also strange because of the tension between the real and the unreal, between storytelling and history. We are constantly aware of the framing device throughout the episode, as we see the behind-the-scenes filmmaking process from the get-go. Marilyn is telling a story, but it’s not her story, it’s her grandfather’s story that she doesn’t even remember very well. Ed is making a movie of this storytelling, which makes us aware of the construction of the story itself. We focus on the camera and are aware that the camera is cutting out most of the contents in its frame. The fact that the story is a movie is foregrounded in the episode, as we see three separate instances of the flashback being framed by the movie viewer.

The consequence of including these scenes is to make the viewer aware of the story as a construction, and making us consider the possibility that the story we are seeing is not true. The artificiality of the narrative is further emphasized in the look of the flashback – the sepia tone, the lighting, and the soft focus sets the story firmly in the past, and remove us from the immediacy of the situation (for example, the colours of this episode are quite different from the colours used in the episode “Cicely”).

We are further made aware of the remove by the contrast between the looks of the flashback and present day Cicely, which is full of vibrant colours. 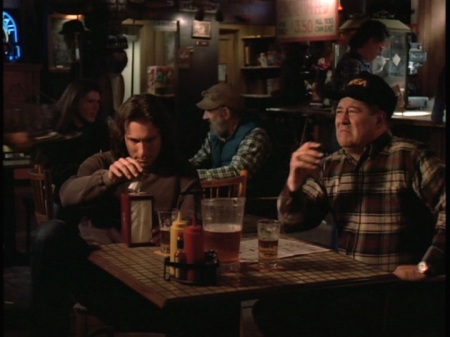 However, there exists a tension between the idea of the story as a constructed, possibly untrue tale, and the assertion that the events depicted actually happened. Marilyn confidently states that Anastasia Romanov visited the town, and Ed seems to take Marilyn’s tale at face value. While the contrast of past to modern day Cicely makes us aware of the story’s artificiality, the actually look and feel of the historical sequence nevertheless highlights the the “realness” of history (the colours and faded look of the scenes connects with what the viewer’s vision of “history” looks like).

Finally, the bizarre end titles lend the story a historical legitimacy when it asserts that Lenin’s policy was influenced by his visit to Alaska. The end titles remind us of historical footnotes found in documentaries and historical films. It’s very weird. It’s as if the writers or producers of this episode couldn’t decide if they wanted the story they were telling to be true or not, so they bet on both.

Themes / Recurrences: The past; film; men and women; class; etc. (There are many themes in this episode.)

The Good: We agreed that aesthetically this is a great episode with some fine, fun moments, such as Rhoda’s interactions with Walt and Lenin and seeing Ed’s interest in filmmaking reappear.

The Bad: We both thought this episode was a grab bag of ideas that didn’t really cohere. If it had been more focused, it may have been more successful overall.

The Notable: Michael Des Barres, who plays Felix Edmundovich Dzerzhinsky, is also a musician, as were many other Northern Exposure actors, including Mickey Jones, Adam Ant, Kermit Cooley, and Moultrie Patten. (Of course, John Corbett and Rob Morrow are also musicians.)