Log line: To celebrate the twenty-fifth anniversary of Minnifield Communications, Maurice plans an extremely elaborate party; Adam and Eve return to Cicely with their new baby.

In 4.21 “The Big Feast”, Maurice throws what Shelly calls “the ultimate kegger” and we see preparations for a huge and sumptuous party. Indeed, Maurice has spared no expense, from importing the best wines, entertainers, and produce (including beluga caviar and white asparagus from Holland). This episode has the most over-the-top mentions of French food, including the “glace de viande” which requires 40 steer, and the $10,000 KBHR cake.

It is interesting how this excess is represented visually, with multiples of things. We see identical objects all in a row, which emphasizes the richness of the event and adds to the decadence of the party.

Bottles upon bottles of booze (and wine): 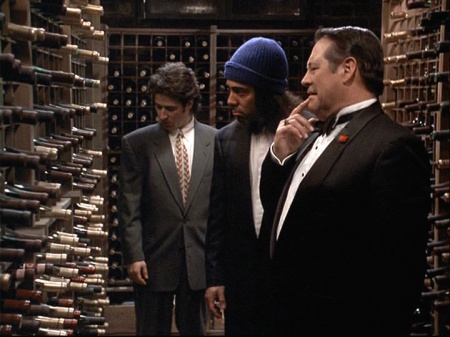 Rows of beef in the cooler:

While the images of multiples point to the decadence of the party, the episode also contains moments of doubling and twins. One object is placed side by side with its alternate, or one object tries to replace another. This idea is exemplified in the Shelly storyline, where, with Eve’s help, she replaces the contents of a very rare and expensive French wine with regular wine (and peat moss, vanilla, pepper, among other things).

In the very beginning of the episode, one bad fish is chosen over a good one.

Maurice struggles to replace one world-class violinist with another.

Maurice creates a miniature KBHR twin on top of a cake: 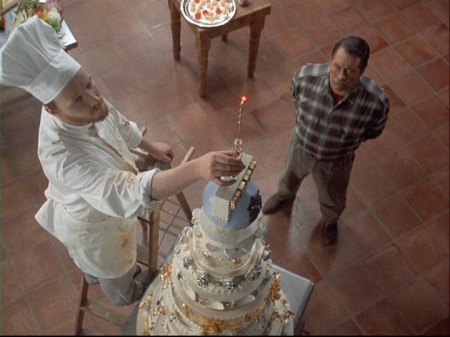 Ron tells the group people used to say that he and Charles Boyer looked like twins.

Ruth-Anne calls herself a “regular two-faced Annie” for her mixed emotions of criticism and anticipation when talking to Joel about Maurice’s party: 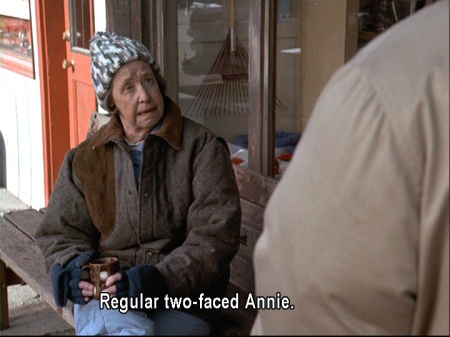 Of course, Adam has a little “mini-me” of his own:

The episode “The Big Feast” is a joyous one, full of amazing sights and beauty. It’s a strange episode in a way, because nothing much happens; however, we spend a lot of time with the townspeople and there is an amazing feeling of celebration at the end. We truly feel that we are among Maurice’s guests, mingling with the flowers, guests, and piles of food. Salut!

The Good: The feast itself is delightful. And we love both Adam and Eve in this episode.

The Bad: One of us (On) thought there should have been more images of the food itself. This episode also lacked the philosophical and emotional weight of some of the very finest episodes of the series.

The Notable: We are introduced to little Aldrich for the first time.