Log line: When Mike gets test results showing he is completely healthy, he feels obligated to leave Cicely and Maggie behind to continue his environmental crusade. 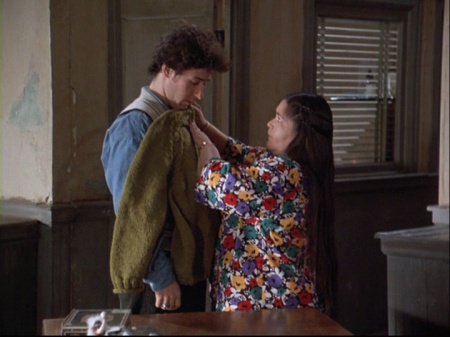 During the podcast, we discussed how each of the three storylines in “Homesick” relates to home, but we didn’t mention the ways we see characters being affected by their environments.

In the opening scene, Shelly suddenly notices the rugged decor in the home she shares with Holling and expresses her distaste for these surroundings, which are full of odds and ends like cactus lamps and taxidermied animals, including a prominently-placed “ratty old dusty halibut.” She needs to change her environment to, she says, “reflect my inner me.” 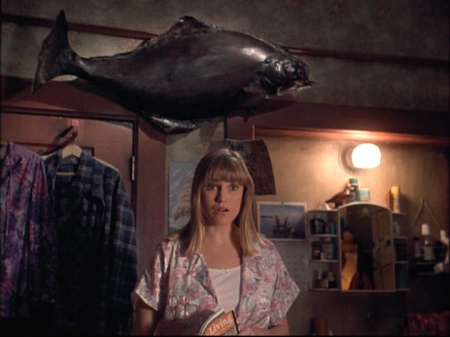 Shelly springs into action quickly and turns the room a pink room filled with ornaments and frilly furnishings. The new environment immediately affects Holling physically and he becomes constipated. 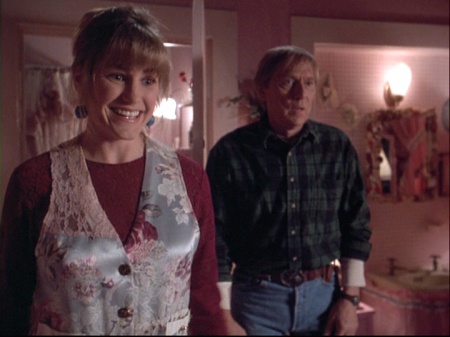 At the end of the episode, the environment hasn’t changed and Holling is trying (and, so far, failing) to “acclimate” to it, like “those fellows that climb Mount McKinley.” 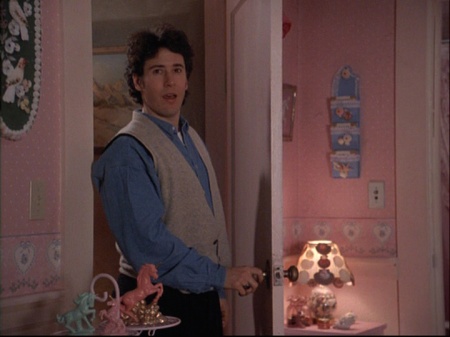 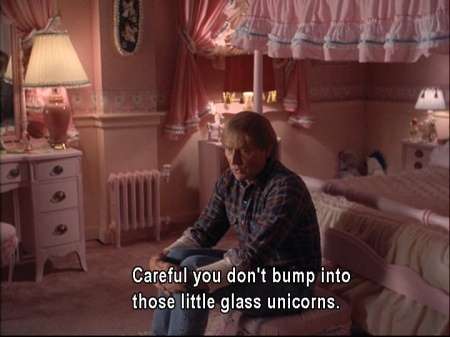 “Homesick” also includes the arrival of another new environment, one that comes directly from Oklahoma. This environment affects Maurice psychologically by brings up his past, which he discusses with Ed and Chris. Many of the artifacts (some of them seen only in his mind’s eye) in and outside of the house remind him of specific incidents, so much so that Chris likens the house to the madeleine that triggered Proust’s Remembrance of Things Past (also known as In Search of Lost Time).

We see a few phases to how this environment affect Maurice. At first, the home brings him pride. He describes it to Ed as it arrives in town as a historic landmark that is “Cicely’s gain.” 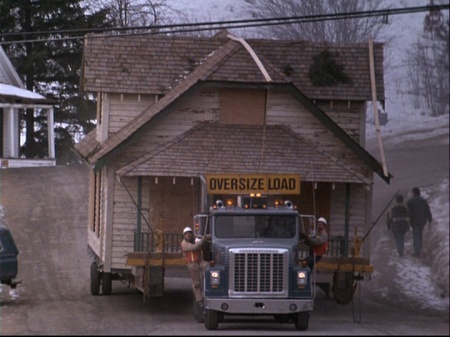 As he describes the home to Ed, he focuses on his family’s history, his mother’s garden, and ends by mentioning a harmless crabapple fight Malcolm and him had with their neighbours. In this story, they worked together to repair a broken window. So far, all is harmonious. 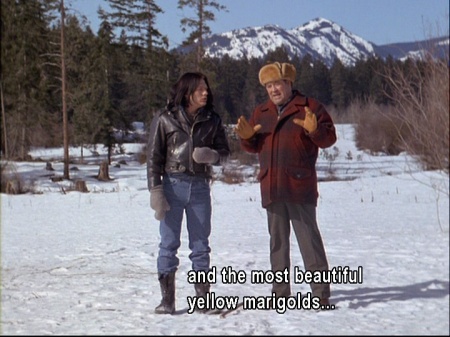 When he begins unpacking items with Chris, he mentions his brother three different ways. First, he mentions the flying carpet they played on. He also talks about his brother working in his baseball glove. Finally, he says that he “can see him now”, that it’s “almost like he’s here, like he could almost come sliding down that banister sidesaddle like he used to do.” In this scene, we also see a hint of darkness when Maurice mentions that he cracked his “brainpan on this hearth one time”, resulting in “twelve stitches and more blood than you’d think a 10-year-old had in him.” Even Chris’ reference to Proust ends with the ominous detail that he “spent the last 15 years of his life in a cork-lined bedroom.” 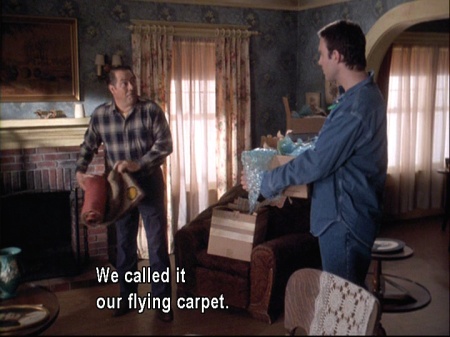 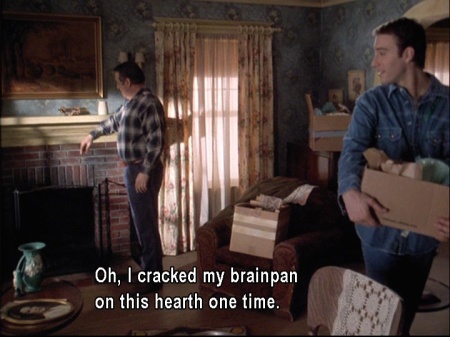 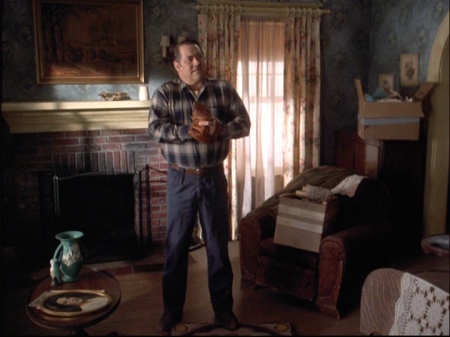 When he pries up the stair, we see the box he had hidden away. The one object that captures his attention is the fish that he stole from his brother. We might also recall that in “A Kodiak Moment” (1.7), Maurice told Chris after his brother’s death that Malcolm and his dad “had the right stuff”, saying that “As far as they were concerned, I was Spam in the can.” A couple of years later, he clearly still has issues to resolve with his brother. 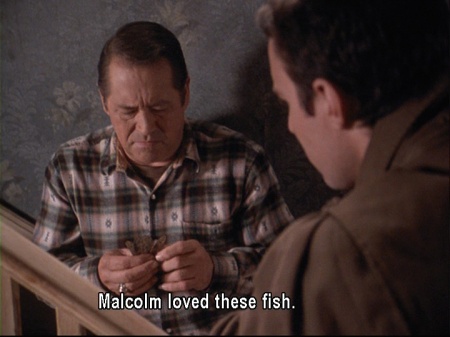 In our favourite scene in this episode, Malcolm descends the stairs to sit with Maurice on “Mom’s good sofa.” On the podcast, we debated whether this scene was a dream or a daydream. (It’s worth mentioning that there are a few other dreams/daydreams in this episode, including Maggie’s black and white dream and Shelly’s daydreaming while perusing interior decorating magazines.) Regardless, Maurice seems to be deeply affected by seeing his brother Mal. He is able to confess that he stole the fish and his brother forgives him, allowing Maurice to be more comfortable in his childhood home — and with his childhood, perhaps. 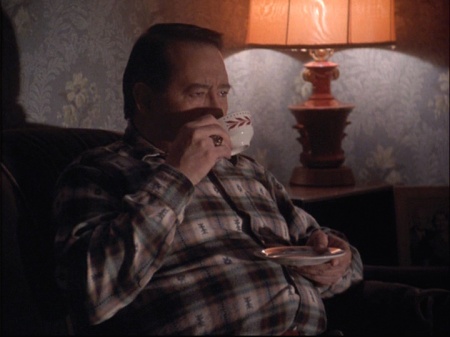 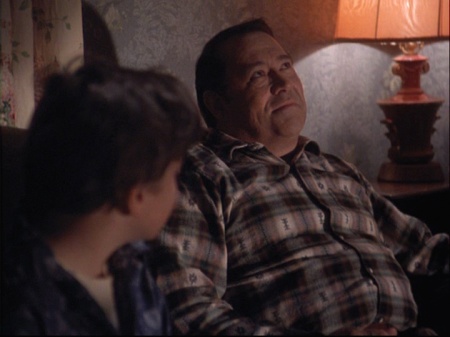 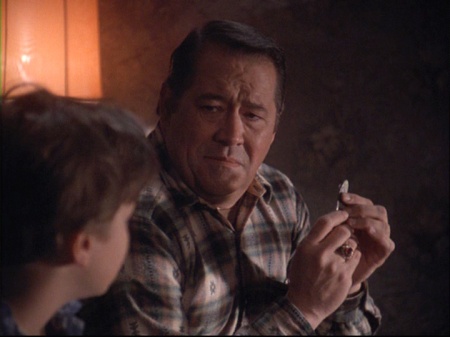 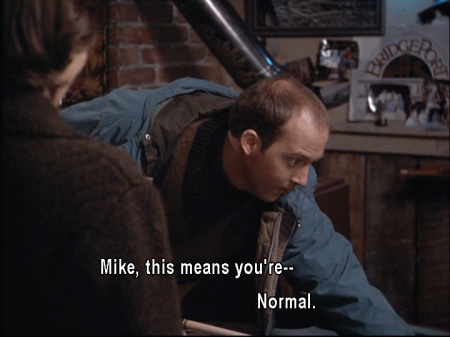 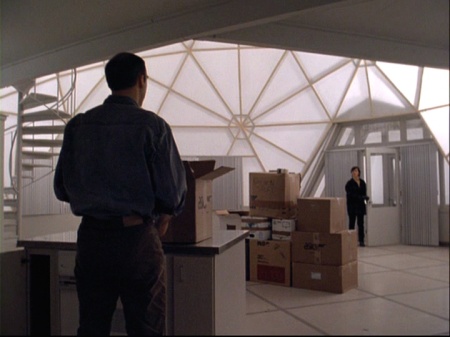 The Good: We feel that the scene where Maurice encounters his brother Mal while Billie Holiday is playing is utterly moving and perfect. Barry Corbin does an amazing job in portraying loss in this episode. The WWII dream sequence is amazingly well done.

The Bad: Holling’s storyline doesn’t seem to be resolved; he is still constipated and still has to deal with living in all that pink.

The Notable: This is the last episode with Mike Monroe (played wonderfully by Anthony Edwards). We know he’s not the most beloved Northern Exposure character, but we enjoyed having him in the series. 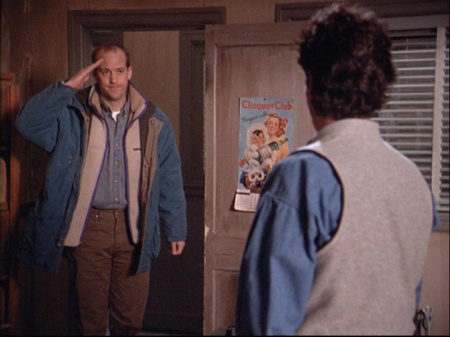 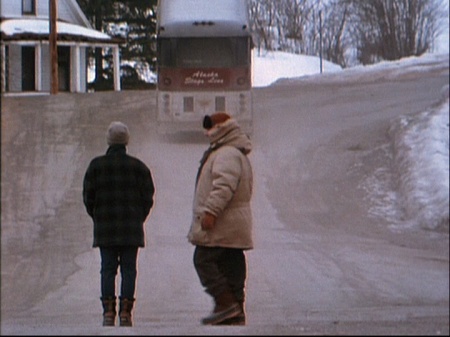