Log line: When a totem pole is carved for the Whirlwind family, a family feud originating from an incident in 1934 is resurrected, dividing the Native Americans in Cicely. 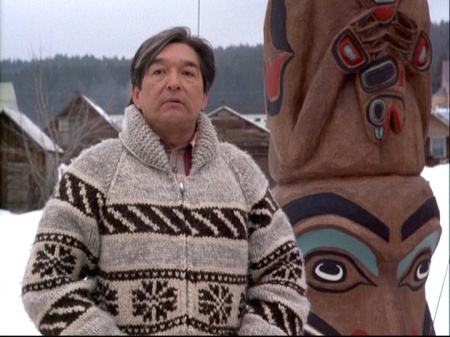 “Family Feud” (4.19) features the return of Leonard Quinhagak (played by Graham Greene). He is revealed to be an accomplished totem pole carver, besides being a shaman (as he was shown to be in “Wake Up Call” [3.19]). He also solves two of the episode’s three thorny problems. The first problem he tackles is Shelly’s visions of dancers, which have been plaguing her since the opening scene. 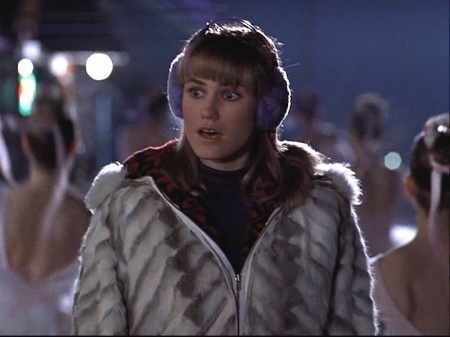 She goes to Joel, who examines her and finds nothing wrong with her physically. So, he suggests she should get psychiatric help.

Chris, her head shrinker of choice, deduces that this could be a revelatory experience — or it could be “some bad acid”, as experienced by his friend Roach. Neither suggestion seems to help Shelly much. 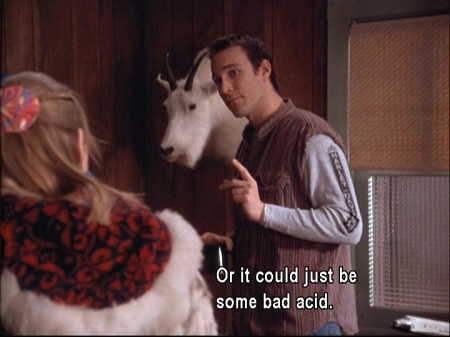 In “Wake Up Call”, Leonard diagnosed Shelly’s skin condition as her shedding her skin “to be reborn, to be new.” In that episode, his prognosis seemed to be right. In “Family Feud”, he is able to tell that she is hallucinating dancers by noting her “eyes glazed over, pupils dilate[d], slight involuntary rhythmic swaying.” He suggests that she needs “a partner, a husband.”

In the end, her cure is a marriage, a pairing. It’s one of a few pairings that we’ll see in this episode. 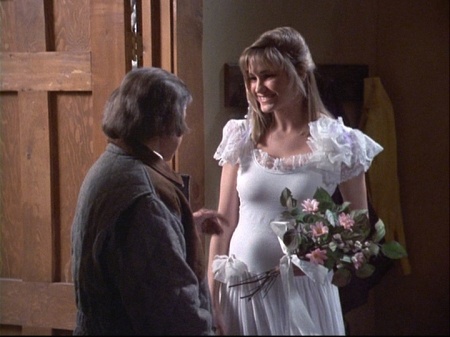 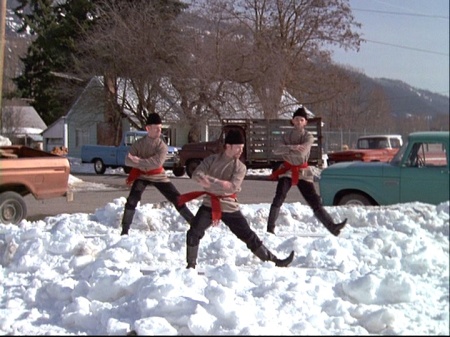 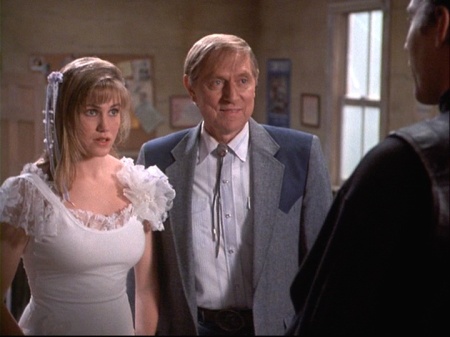 Another problem that Leonard is able to fix is the totem pole with the controversial fish crest, which leads to strife between the Raven and Bear clans.

One possible suggestion for how to resolve this situation comes from Chris, who raises the idea of removing the fish crest entirely.This initial solution isn’t reasonable, just as Joel’s exam of Shelly didn’t get to the root of her problem.

In the end it is Leonard who resolves the issue by creating a second, fish-crest-less totem pole that will stand beside the first one. These paired, parallel narratives will represent both sides of the story — twin slideshows, if we take Ed’s description a totem pole unveiling. 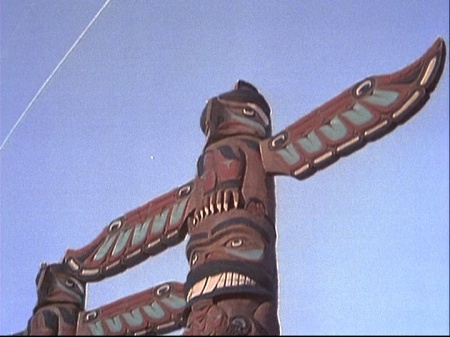 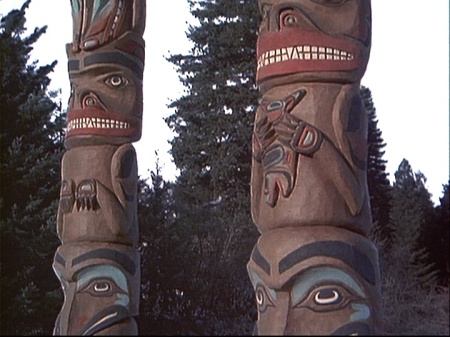 The third problem in search of a solution is Joel and Maggie’s relationship and whether they are ‘just just’ (in Maggie’s description) or ‘just whatever’ (Joel’s term).

The first attempt to resolve these competing versions of their relationship results in Maggie proposing they be friends. Joel rejects this concept, stating that their relationship isn’t something she can “domesticate by putting in a box and mislabeling it ‘my little friend’.” As with the hallucinations and the fish crest, the first proposed solution doesn’t work. 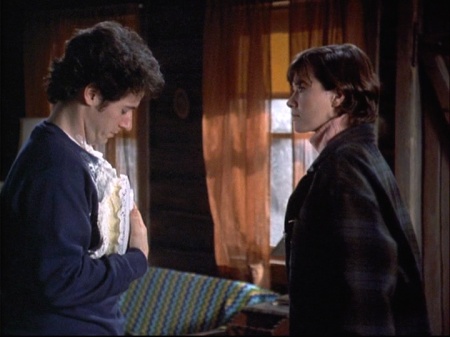 Interestingly, a (sort of) solution stems from labelling their relationship. They try a few variations on describing their relationship until they eventually agree to identify themselves as “mutually desirous incompatibles.” That they can categorize themselves in this way brings them together in an unusual pairing, almost like the two incompatible stories depicted on the totem poles — one with the fish crest and one without — mutually incompatible stories. 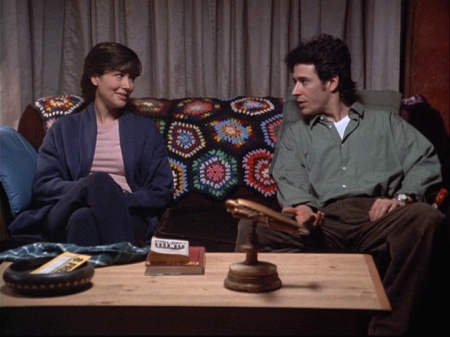 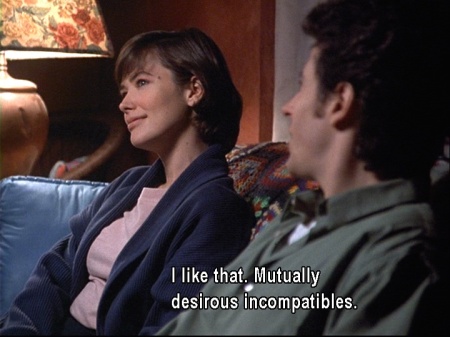 It’s worth noting that all three of these storylines also involve something unstated being represented in a concrete form that makes the idea more tangible. Shelly and Holling have been a couple for quite some time and have nearly gotten married a couple of times before. Their marriage finally solidifies their relationship in an official (albeit very brief) ceremony. Similarly, Joel and Maggie have felt attracted and repelled by one another since he arrived in town; giving their relationship the term “mutually desirous incompatibles” makes the tension between them more understandable to both of them. Finally, we see the two competing narratives of whether Harold’s actions should be celebrated or not made concrete (well, cedar, actually) in the form of two totem poles, a physical representation of what people have felt for decades. In fact, all three narratives show feelings being turned into a more stable form, whether it’s a phrase (as with Joel and Maggie), a physical object (as with the totem poles), or a ceremony (as with the wedding). 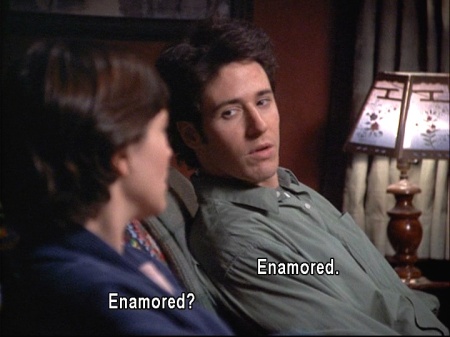 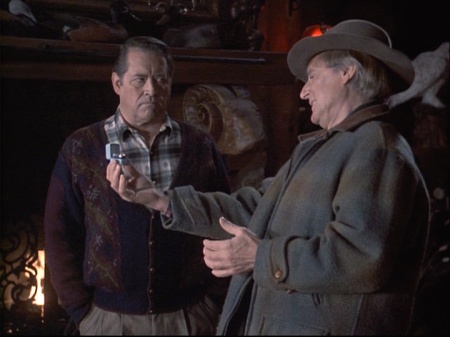 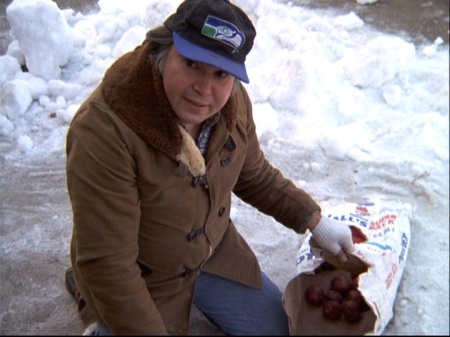 The Good: We loved the fact that the main plot centers around the show’s First Nations / Native actors and characters. It’s pretty rare and it is great to see more of Dave the Cook. Plus, Joel’s tap dancing was amazing!

The Bad: For one of us, the marriage between Shelly and Holling seemed rushed and out of the blue, especially after the last two non-events. What about all of Holling’s reservations?

The Notable: This episode marks the directorial debut of Adam Arkin (a.k.a. the actor playing the recurring character of Adam the truculent chef). 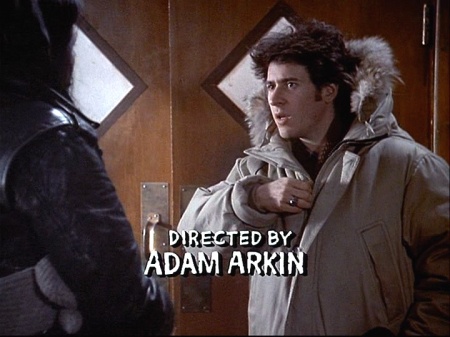