Log line: Maggie teaches Joel a lesson in social etiquette; Chris is shaken when a KBHR listener blames him in his suicide note; Shelly takes Randi to Canada to see her roots.

Music is often an important element in Northern Exposure, and it is particularly foregrounded in “Northern Hospitality”, in which taxidermist Edgar Hankins blames his suicide on a song played by Chris. In his monologue prior to playing it, Chris talks about its importance in his own life, saying it was “the first song I played on that Kmart turntable my first day of freedom.” For him, the song is joyous; it’s linked to being no longer deprived from being able to listen to music of his choosing, to being a free man. 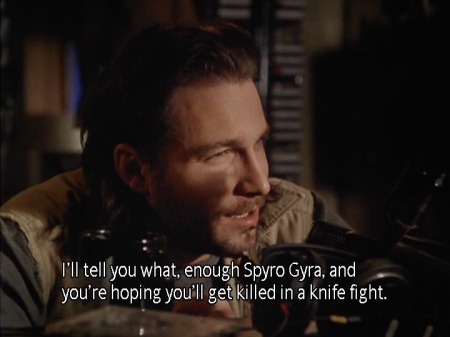 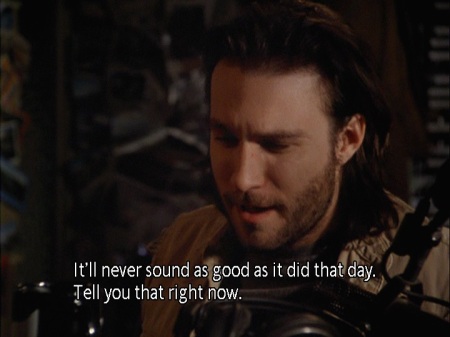 While the song “Pencil Neck Geek” by Fred Blassie plays, we see shots of radios around town. These shots foreground the ubiquity of KBHR in the lives of the Cicelians and shows how many people are hearing the songs Chris plays. As we see shots of the radios, we can’t help paying attention to the lyrics of the song as the music plays. The chorus says it all: “Pencil neck geek, grit eating freak, / scum sucking, pea head with a lousy physique. / He’s a one man, no gut losing streak, / nothing but a pencil neck geek.” We all have associations with certain songs and it’s not easy to discern how Chris connects to this song, but it does have a certain ramshackle charm to it. It’s also clear that the song affects at least a couple of people: a taxidermist and Ed, who stops working to look at the radio. The last radio shown is beside a taxidermied ram’s head in the Brick.

After this incident, we see Chris (and Ed) paying close attention to the music that remains in the KBHR repertoire. Anything that sounds too gloomy or has lyrics that might be misinterpreted has to go. There are references to several specific artists and songs. One artist who is nixed is Billie Holiday, a familiar artist for KBHR listeners. We hear her sing “Blue Moon” in two episodes (1.8 and 2.1), as well as “Let’s Dream in the Moonlight” (in 3,2) and “I Wished on the Moon” (in 5.1). Suddenly, she has been blacklisted. Replacing this music are the Cowsills (“The Rain, the Park, and Other Things”, which features lyrics like “She could make me very happy / with flowers in her hair / flowers everywhere”), the Cyrkle (“Red Rubber Ball”, which optimistically suggests that “the worst is over now / the morning sun is shining like a red rubber ball”) and the Four Preps (“26 Miles”, which declares “Santa Catalina the island of romance, romance, romance, romance”). As Chris stumbles on the radio to put a happy face on everything (“We’re talking about, oh, seeing that glass half full or, uh, making lemons into lemonade”), we see him reach unenthusiastically for the Four Preps album On Campus. 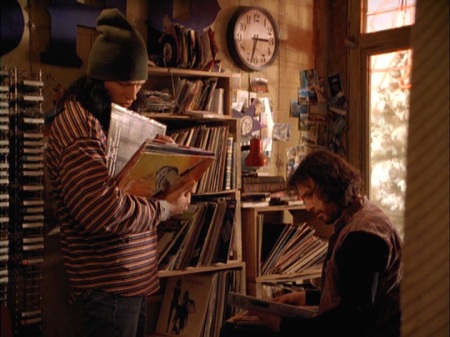 We also have two songs related to the Holling-Shelly-Canada storyline. “O Marie” by Daniel Lanois plays as Holling rides a snowmobile to the border. Its lyrics are in French and Lanois is Quebecois, just as Holling was before giving up his Canadian citizenship. Lanois is also, like Bille Holiday, another artist whose music we have heard extensively on the series, including his song “Jolie Louise” (in 1.1 and 3.6) and “Under a Stormy Sky” (in 3.2 and 4.10). Similarly, Holling’s performance of “This Land is Your Land” (with revised lyrics) brings to mind an earlier version of the song, which appeared in season one (in 1.6). 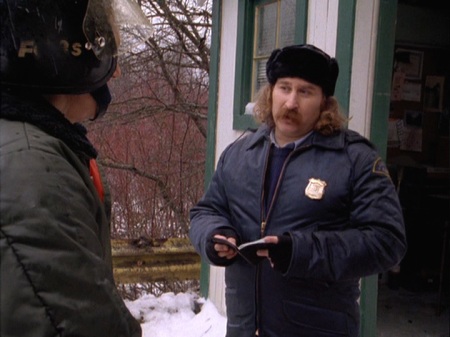 The last song Chris plays is Jimi Hendrix’s version of “Hey Joe”, which is a song played for Edgar and a song that is also about a man killing his female partner with a gun. It’s far darker than the novelty tune “Pencil Neck Geek.” As with the earlier song, we see visuals that focus our attention on the lyrics: a shot of the turntable spinning, Marilyn smiling and listening to a walkman (clearly meant to be tuned to KBHR), a shot of the radio and, finally, Joel doing a weird drumming to the tune with his fingertips on the counter in the Brick. None of these listeners are disturbed. As Chris said at Edgar’s funeral earlier in the episode, “I played a song that was beautiful for me, and for Edgar it hit a button marked emotional meltdown.” The similarity of the shots during the opening and closing songs (showing the radio, letting the lyrics linger) show the different ways people can react to art. As Chris also says at the funeral (quoting an old poem — and also evoking his time in jail, when he was deprived of his music), “Two guys looked out through prison bars and one saw mud, and one saw stars.” 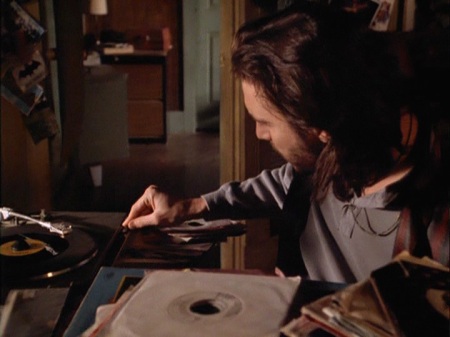 The Bad: One of us didn’t enjoy Holling’s rendition of “This Land is Your Land” or the montage, but the other one of us thought it worked quite well.

The Notable: Although he didn’t have a prominent storyline in this episode, we always love how Adam brings a little bit of chaos into the world. In this episode he disturbs the water on all three storylines in his interactions with Chris, Shelly, and Joel.