Title: Birds of a Feather

Log line: When Joel’s parents trek to Cicely, it ends up being a soul-searching time for all three; Holling shocks everyone when he reveals that he is bored by sports. 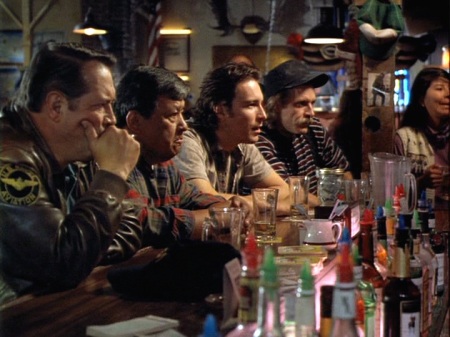 Holling’s distaste for all sports is one of the main story lines in this episode. Typically, we have had Joel in the role of sports enthusiast, particularly with golf (e.g., “Schemes, Dreams, and Putting Greens”) and basketball (e.g., “Midnight Sun”). We’ve had a few baseball references sprinkled throughout the series before. Heck, even Joel’s basketball obsession in “Midnight Sun” (4.2) plays off of baseball being America’s pastime. In that episode, he argues that baseball is “sneaky” because it “uses poetry to invade our brains and stick to the walls of our unconscious,” citing “Casey at the Bat” as his prime example. (It’s worth noting that Chris will later analyze “Casey at the Bat” in “The Graduate” [6.17].) 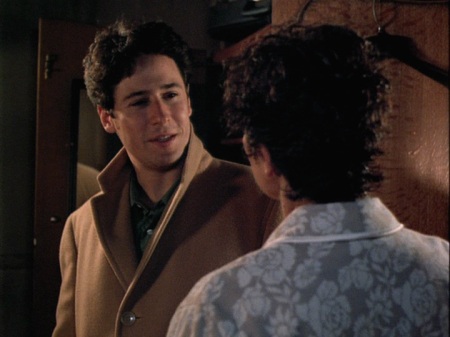 But Joel wasn’t always anti-baseball. For example, we know from “Seoul Mates” (3.10) that he envied his neighbour’s “autographed Bobby Mercer baseball glove,” reminiscing “God, I loved that glove.” Appropriately, it was Joel’s Uncle Manny, whose camel hair coat he wears in this episode, who took him to his first Yankees game. (Outfielder Bobby Mercer was most associated with the Yankees, as well.) 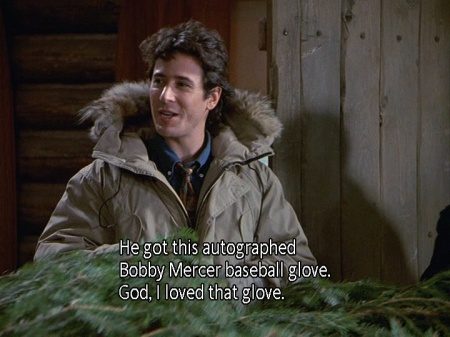 In “Kaddish for Uncle Manny” (4.22), Joel finds a photo of himself and Uncle Manny in front of Yankee Stadium. He recalls, “Thurman Munson hit a homer off of Jim Palmer to win it in the ninth.” His other memories of Uncle Manny are also wrapped up in baseball. “He didn’t have any kids,” Joel says, “so he kind of adopted me. We would listen to Yankee games and we’d play gin rummy.” When asked why you need ten people to form a minyan, Joel replies, “You know, nine guys on a field to play baseball and ten Jews in a room to say Kaddish.” So, it’s entirely appropriate that an episode with a discussion of baseball would include a reference to Uncle Manny.

Interestingly, the language used to describe baseball in “Birds of a Feather” is quite connected to nature. The first thing Shelly says about the glove is that it “smells like real leather, almost”, with leather coming from the hides of dead animals. She continues that their kid will be able to “scoop up the grounders” with it. Here, Shelly is wearing hand earrings; she’ll later have a baseball bat and a baseball. 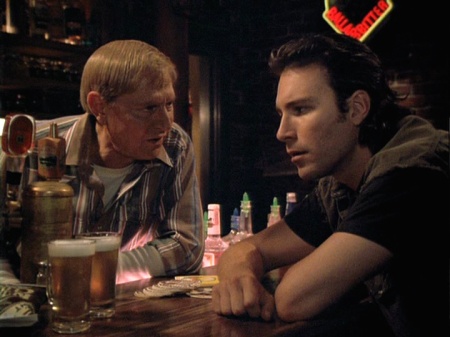 Later, Chris will mention pitchers “coming in with their smoke high and fast”, a reference to the velocity of pitchers’ fastballs. Speed-wise, Holling will counter that the game is “slow as sap.”

Chris will counter Holling’s dislike for the sport by remarking on its bonding abilities, including him “shagging flies” with his own abusive father. Leather, the ground, smoke, sap, flies. Baseball is a game that’s closely connected to nature. Leather gloves, wooden bats, dirt, grass. 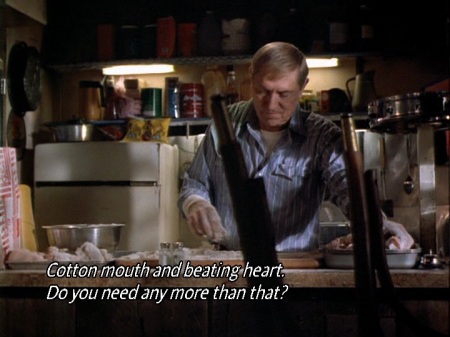 Appropriately, Chris poetically describes the situation of having the “bases loaded, two outs, bottom of the ninth” as “cotton mouth and beating heart.” Of course, this may remind us of Joel’s first Yankees game with Uncle Manny, witnessing “Thurman Munson hit a homer off of Jim Palmer to win it in the ninth.”

Ultimately, baseball is about making making something (a ball) fly. It’s also about being able to stop talking and focus on the minutiae in front of you. In these ways, it echoes the storyline of Joel’s mom, Nadine, learning to listen and possibly to fly.

When we first see baseball being watched in the Brick, a ball is described as being hit “deep to center.” It appears to be a sure home run, but it’s reeled in with a “beautiful catch.” Later, Chris will describe “the sheer ability of Ken Griffey Jr. climbing the wall to snag himself a homer.”

There is also a beauty in stopping something from flying, catching it before it lands, beyond the bounds of the stadium, in the same way that Nadine “went down on the wind”, as though she were “gliding”, not falling. It appears that it’s over, all is lost. Then, it isn’t. Everything turns on a dime.

The Good: We both enjoyed the appearance of Joel’s parents and the emotional resonance of Joel wearing Uncle Manny’s camel hair coat. Holling’s distaste for sports was also pretty enjoyable, though we don’t necessarily share his feelings for baseball.

The Bad: The flying scene felt unconvincing. It would have been better to have either made this moment more transcendent or to have not shown it on screen and simply had Nadine describe it.

The Notable: Nadine seems to be an avid fan of female mystery writers, recounting the plots of both Sue Grafton’s J is for Judgment and Sara Paretsky’s Guardian Angel.