Log line: Cicely readies itself for the annual Day of the Dead parade and Thanksgiving Day feast; Joel discovers he owes the state of Alaska a fifth year of service.

Listen to the podcast discussion of this episode here.

In our podcast discussion of “Thanksgiving”, we referred to the undercurrent of suppressed anger and violence that runs throughout this episode. Marilyn even says at one point that Natives “have a lot of anger.” When Joel asks why they throw tomatoes at white people, she says that the juice from tomatoes looks like blood but it doesn’t hurt.

In a later scene, Joel asks Dave if he thinks throwing tomatoes at white people is “an acceptable way to express that hostility.” Dave responds calmly that there are worse ways to vent one’s anger.

This undercurrent of frustration is one of many remarkable things about this episode. No one in Cicely (aside from Joel) is dismayed that the Natives are throwing tomatoes to get out their pent up aggression. After Shelly is splattered with a tomato, she wishes a happy Thanksgiving to Randy and Melissa, who threw the tomato at her. Similarly, Mike puts his arm around the person who got him in the chest with a juicy tomato. Ruth-Anne says that she adores “this time of year” with the “the skeletons, and the tomatoes, and the death’s head pumpkins”, stating that “a little more laundry for us white folks is a small enough price to pay for a wonderful holiday.” Even Marilyn’s story about Death swallowing a pumpkin seed leads to a quiet critique of white people. It’s sort of amazing that the writers of the show were willing to portray Joel, the one person who doesn’t agree with the tomato throwing ritual, as the one who doesn’t understand the situation historically or presently.

In an episode with quite a few callbacks to past episodes, Joel’s assertion that he isn’t white clearly reminds us of Chris wearing cornrows (in 3.7 “Roots”) and declaring himself to be a “person of color.”

Another episode that is evoked by the mash-up of Native and non-Native traditions, holidays and iconography is “Seoul Mates” (3.10) with the Native symbol of ravens, which mingles with Christmas decorations. Both episodes even open with the town being decorated.

The tomato lights in this episode even resemble the ones in “Seoul Mates.”

The death figure on the KBHR turntable recalled for us Maggie’s diorama featured in “What I Did For Love” (2.4), which later melted in “Burning Down the House” (3.14).

“Thanksgiving” also has a few parallels with “Our Tribe” (3.12), which had Joel being adopted by Mrs. Noanuk. Here, he is allowed to march in the parade with the Natives when Marilyn declares that he has no hope. During the parade, he wears the bearskin vest he received in “Our Tribe.”

At the start of “Thanksgiving”, we follow Joel and Maggie as they walk the streets of Cicely, discussing Thanksgiving. Well, mainly Joel is enthusing about how much he loves the holiday and Maggie is chiming in where she can. If you look closely at the windows to the stores they pass, you’ll see tomatoes and skeletons featured.

One of the windows even shows a skeleton getting splattered with a tomato. A nice little detail. The pumpkin on the left even looks a bit like Joel when he gets hit by Ed. The skull to the right seems to be grinning. 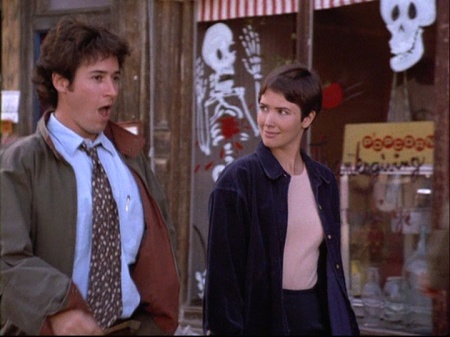 If you look at each of the three white people who get splattered with tomatoes, you’ll see that each of them is hit approximately where their heart is located. And it does look a bit like they’ve been shot. Here are the three tomato hits in chronological order (Joel, Mike, Shelly):

Joel’s stunned look and the splatter of tomato juice even makes it look like he’s been injured.

In “Thanksgiving”, tomatoes begin to function almost like weapons of resistance used by Natives against the whites who (in Marilyn’s words) “cleared the forest”, “dug up the land” and “gave us the flu.” The foundation of this episode is the anger resulting from the subjugation by Europeans of the indigenous peoples of North America (and South America; don’t forget that’s where both tomatoes and the Day of the Dead holiday originate). The only characters we see brandishing tomatoes in “Thanksgiving” are Natives. 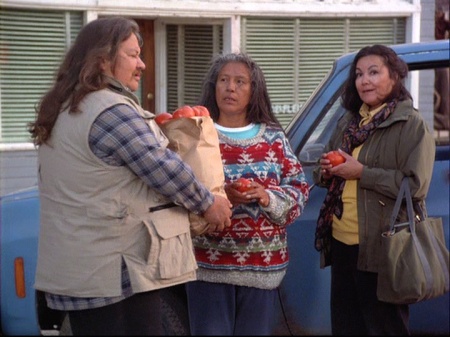 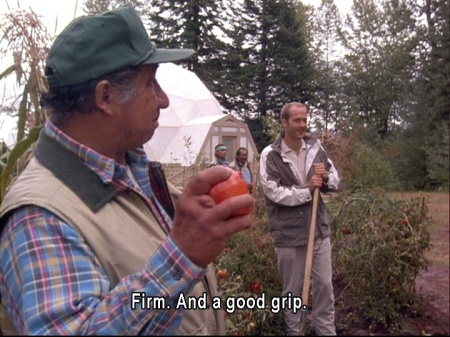 As in the image above, we often see tomatoes in close proximity to skulls and skeletons. This also helps to tie the visual symbol of the tomato to death and violence. 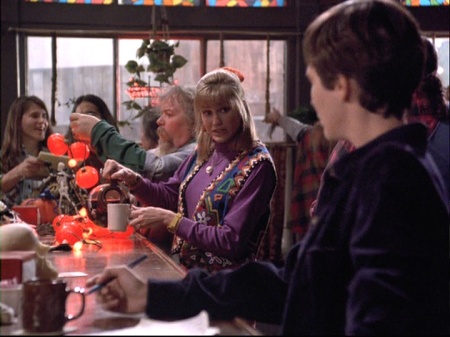 One great Marilyn-related visual on this topic involves seeing the single tomato on her desk early in the episode replaced by an entire basket of tomatoes later.

As with many episodes of Northern Exposure, “Thanksgiving” is about death. What else would you expect from one centred around the Day of the Dead? What’s so surprising about this episode and many of the others about death is the sense of joy they also have. Both the parade and the feast at the end are perfect examples of this. We see numerous skulls and skeletons, but there is an exuberance at the same time, a feeling of enjoying life while we’re still alive. 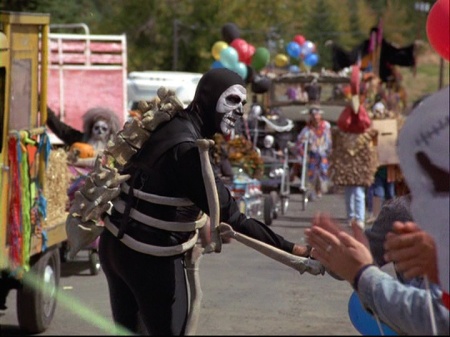 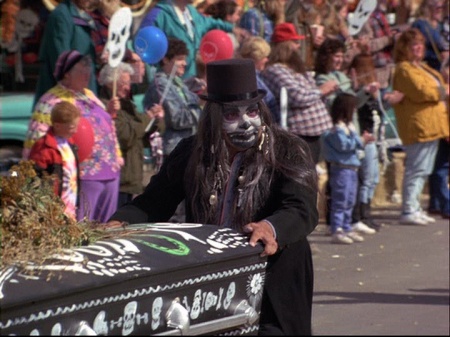 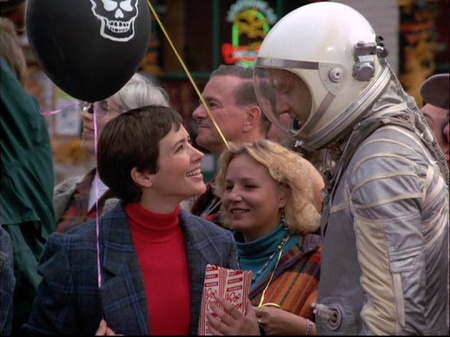 The Good: The art direction of this episode is fantastic, as Cicely is decorated with tomatoes and skulls, and we witness a life-affirming Day of the Dead parade and an immense feast. Rob Morrow’s emotions run the gamut in this episode, and we definitely admire his acting chops. In fact, we also love the performances of John Corbett and Anthony Edwards as well.

The Bad: There is not very much to be said in this category. Let’s move on, shall we?

The Notable:  We find it interesting and puzzling that this is Joel’s first Thanksgiving in Cicely, since he has been living there for quite some time now.