Log line: Much to Holling’s dismay Ed discovers that Jesse the bear has died; Japanese tourists infiltrate Cicely; a package that has traveled the world arrives in Cicely addressed to an unknown person.

Death. Exploration. Adventure. The episode “The Final Frontier” is all about the big ideas, the things that move a society forward and compel it to greater heights, or as Chris says (of curiosity), “It’s the fire under the ass of the human experience.” Each of the three stories – Jesse the Bear, Maurice, the package –  tells us of the big and small ways in which we are surrounded by a sense of wonder and awe, like how Holling rediscovers the spirit of Jesse through putting himself in life-threatening situations, or how Maurice’s fantastic space adventure is relived by a group of Japanese tourists, or how all of the townspeople of Cicely would risk breaking US federal law just to see what’s inside a mysterious package.

Angles To See From

The framing of many of the shots convey how objects can become bigger than life. The package addressed to the unknown Richard McWilliams is just a box, but becomes the symbol for a human being’s innate curiosity and consequential drive towards progress. The skeleton of Jesse the bear literally towers over everyone, but it is ultimately the idea of Jesse that is the biggest thing of all. It’s interesting that these ideas are translated visually by foregrounding the two objects.

The camera angle makes Jesse loom over both Holling and Shelly:

The rib cage of the bear is in the foreground, quite literally surrounding Holling.

Similarly, the package is often shown in the centre, in the foreground of scenes:

The package is filmed from a lower angle to appear huge.

For the group of visiting Japanese tourists, Maurice is the object of admiration and awe. Interestingly, in these scenes between the group and Maurice, he is often elevated, so the visitors are literally looking up at him. (The difference in height levels is echoed in the scenes involving Jesse the Bear’s skeleton.)

Here Maurice is standing on the step leading to his KBHR office. Although slight, the effect is Maurice being on a pedestal.

When the visitors visit Maurice’s home, the difference in levels is much greater: 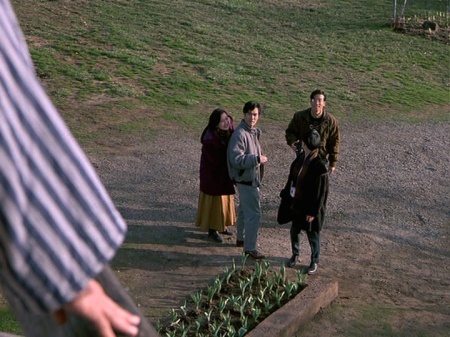 The difference again occurs during Maurice’s talk at The Sourdough Inn, where Maurice is standing while the guests are sitting on the floor:

An End and a Beginning

In both the stories of Jesse and the package, we get beginning scenes that echo the end scenes of the episode. The end recalls the beginning in quite an uncanny way, and serves to visually end the episode strongly and cohesively.

With the package, we get near identical shots of Ruth Anne’s hands touching the box’s label:

With the story of Jesse, when Holling and Ed go to see the bear’s bones early in the episode, the movement of the camera goes from a low shot to a high, overhead shot:

The final scene of the episode takes place in the same location, but this time the movement of the camera is reversed: first, an overheat shot, then a low level shot:

The Good:  We love the return of Jesse, and while we are sad that he has died, we are happy to learn that his spirit can be found everywhere if you go out and look for him. We also love Ron and Eric, who are really wonderful.

The Bad: The package, though interesting, seems a bit too contrived. Even in the often magical world of Northern Exposure, the story of the package seems a bit far-fetched.

The Notable: Strangely enough, the man who Holling has an argument with over Jesse is wearing a very similar looking shirt to Holling. What might this mean?