Log line: Temporary madness sweeps through Cicely as the townfolk await the ice meltdown and the arrival of spring.

Naked and unashamed, together

“Spring Break” begins and ends with nakedness. In Maggie’s dream, she and Joel suddenly find themselves au naturel after eating a red pippen apple near the snake. And they are surprisingly unembarrassed – even Joel. Nakedness also concludes the final scene of the episode in the final “Running of the Bulls” sequence. (Clearly, Maggie would have known that this annual event would be coming up fairly soon and that she would be seeing Joel in the buff.) The men running through the streets of Cicely are also refreshingly unashamed, even Joel, who hadn’t prepared himself for this moment, believing the run would be more like a marathon. (In a series with many shots of topless men, this episode takes the cake.) The communal spirit driving the “Running of the Bulls”, which could have been a simple display of machismo, is joyous. It somehow feels entirely natural that after the ice breaks the men of the town would run naked through the freezing streets of Cicely with the women cheering them on. (Ed’s absence from this event is both conspicuous and fitting.)

In the podcast, we read two passages that discussed the use of Lindsay Buckingham’s “D.W. Suite” to score this scene. (The first passage appears in the section “The Sounds of Cicely” in The Northern Exposure Book by Louis Chunovic, and the other passage is from the article “Moose Music” by Stephen Fried, which appeared in the Nov. 1991 issue of GQ Magazine.) As with the unashamed nudity that bookends the episode, “D.W. Suite” also appears at the start and close of the episode. First, it is played by Chris on KBHR and accompanies the shots of the landscape covered in snow and icicles melting. Then, it plays over the “Running of the Bulls” sequence, with the sounds of cheering removed: “If we go, go insane / We can all go together / In this wild, wanton world, / We can all break down forever.” In an episode full of wildness, lust, and community, this feels like the perfect song. Even the echoing of the voices on the song (“in this wild [wild wild wild wild] wanton world [world world world world]”) suits the echoing of several motifs, including nudity (start/end), lust (Joel/Maggie), fantasies (Joel/Maggie), sleuthing (Officer Semanski/Ed), radio theft (Joel/Maurice), reading aloud (Shelly: The Rainbow/Chris: Where the Wild Things Are), bingo (Beefcake Bingo/Ruth-Anne’s ‘Born To Bingo’ shirt), jungles (opening/Chris’ zoo vs. jungle analogy), bears (KBHR/Sergeant Semanski was dealing with rabid bear when she was called to Cicely), romantic rejection (Joel with Betty/Maurice with Officer Semanski), et cetera, et cetera.

A dream of igloos, root beer, Demi Moore, and chipmunks

We see four dream sequences in this episode: one of Maggie’s (the opening jungle) and three of Joel’s (the “Simply Irresistible” video; the igloo scene; and the office unbuttoning). (It’s worth noting that the only fantasy that is consummated is the one that doesn’t involve Maggie: the music video, though Joel later complains that it wasn’t satisfying. It’s also the only fantasy where Joel was playing a character, a rock star.)

Previously, Joel’s dream in “Russian Flu” was filled with his ideas of Native culture, including totem poles and children dressed as Eskimos. Here, Joel imagines the ‘pretty girl’ Ed knows as living in an igloo. Obviously, he knows that wouldn’t be the case, but he still images her clothes and home as something he’s seen in movies and photographs. His dream also includes Native flute music, similar to what we have heard during scenes with Uncle Anku and One-Who-Waits. The beverage she offers him is unexpected (root beer with ice). (Apparently, the beverage might not be cold enough in the igloo without it.) We aren’t certain whether the language “Betty” speaks is an actual Native dialect or not, though we’re leaning towards ‘not’. (If you have any information, we’d love to hear it!) Perhaps Joel recasts Maggie as “Betty” because he hasn’t had luck consummating any dreams with the actual Maggie? 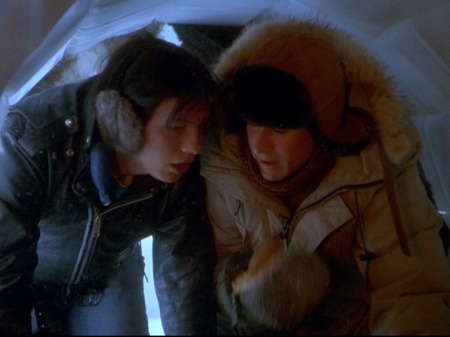 Like other conventions used in film (the flute music track is an example), the dream also includes subtitles, which let us know that Joel might see himself as looking a little too much like a chipmunk. (Perhaps he’s heard this line before?) Ed doesn’t translate this line as it is spoken, which shows that Joel is aware of Ed’s emotional intelligence. Ed’s comment that “Betty” looks like Demi Moore also tells us that even in Joel’s dreams he’s aware of the cinematic lens that Ed applies to the world.

On the podcast, we mentioned the number of beverages that seem to bring people together in this episode. Here are a few of the more prominent ones: 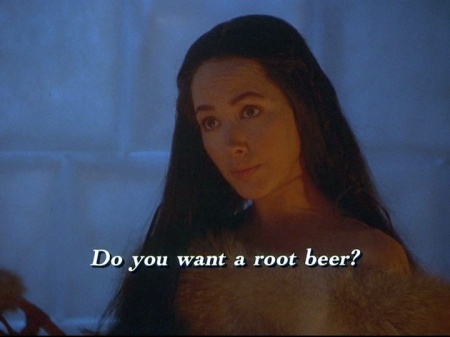 And one that does the opposite: spilt milk:

The Good: We marvel at how well done the parody of Robert Palmer’s music video for “Simply Irresistible” was. The wardrobe, the make up, the lightning, and the shot-for-shot recreation were visually impressive, and the entire scene was hilarious, showing much of Joel’s state of mind at the time.

The Bad: While most of the characters undergo personality changes, the transformation of Shelly into a compulsive book-reader was a little hard to take. To us, Shelly is too much the ‘dumb blond’ character here, because we know she’s actually quite intelligent and perceptive. I suppose we wish that Shelly would have actually understood more of what she was reading.

The Notable: It was wonderful that no one even blinked at the idea of Holling boxing with a woman. Of course, this much has to do with the power and strength of Officer Semanski, but everyone seemed perfectly okay with the idea of a man fighting a woman (which makes Barbara clocking Holling all the more satisfying after his comment “I’m not gonna fight a woman!”)